A month ago, the thought of tangling on a black tile–especially with a white Gelly Roll® pen–made my stomach knot up. I kept trying, but it was more difficult to conquer the fear of black tiles than anything I’ve ever done–except quitting smoking; I’m still working hard on that.

When I was at CZT Seminar 27 last month in Providence, RI, the topic came up in a conversation with Maria Thomas, one of the Zentangle® founders, about fear of tangling on black. Every wobble of the white pen is so vivid. Amazingly, many talented tanglers had trouble working with black tiles. Maria thought about it for a moment and said, “Start with gray.” The next session was starting, so there was no opportunity for clarification. But I thought about that, and thought hard.

When I returned home, I tried several things. I tried gray markers and brush pens first, but they just disappeared into the black tiles. Next, I tried some light gray color pencils, which worked OK in terms of showing up on the black tile, but required a lot of pressure and constant sharpening. Using gray gel pens produced better results. I even tried using gray markers and gel pens on top of white ink. Nothing was working for me. So I simply turned to some of the less bright Gelly Roll Moonlight pens I had in my arsenal. Those gave me a feeling that not every wobble was showing up on my tiles, and helped me get comfortable with tangling on black.

Finally, I started tangling on black tiles with white gel pens again–but not with the recommended Gelly Roll. Instead, I used a slightly finer tipped white pen by Uniball, called Angelic. That slightly finer line made the difference for me. From there, it was nothing to pick up the white Gelly Roll without thinking, and tangling away without fear, and quite happily!

For me, it was a process to lose the fear of tangling white on black. Although I am still unclear of what Maria meant by suggesting I start with gray, her suggestion got me trying new things with black tiles. I found that tangling with colors was a lot less scary. I also found that moving to a finer white pen helped a lot, especially with working towards using the broader white Gelly Roll pen. And sometimes, we need that process of discovering what works better for us before we can pick up the expected tools again. 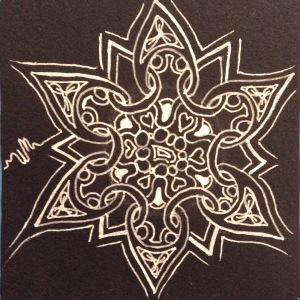 Interestingly, cost may have been a factor for me. I started tangling white on black using the far less expensive black tiles from Peter Pauper Press. Official Zentangle black tiles are costly in comparison. I had tons of PPP tiles, but only a handful of the Zentangle tiles. At the Zentangle store during Seminar, I bought tons of official black tiles. When I came home, I pretty much dropped the less expensive tiles. That recommendation–not using inexpensive black tiles–actually came from a methods e-book by artist and CZT Eni Oken, in Glow on the Dark, an e-book on 3D shading on black tiles (available from EniOken.com). Since I had a bunch of high-quality official black tiles, I was a bit braver about using them for experimentation. [It is so difficult and time-consuming to get specialized stuff on the island that I cringe every time I put in an online order. It doesn’t stop me from buying online, but I still cringe at the extra mailing costs, especially if I don’t want to wait months for postal inspection. (That’s why we use a courier service–stuff gets through so much faster!)]

I guess what I am trying to say is that I couldn’t conquer my fear of tangling in white on black until I had the right tools to play with–tools that made it easier for me to move from cringing to creating.