After a slew of back to basics tiles that addressed exercises in the Zentangle Primer, and after doing my best to tangle larger, I drew my first “for fun” tile in what feels like ages! I started with a freehand string drawn in turquoise ink with a Pentel Art Brush. This created thicker strings than I am used to using. The idea came to me after o used a pre-watercolor-augmented tile for the  Valentangle 2017 challenge on Facebook last month. I thought it might be funny. To see where something similar, but in a single tont of a color was used for a string. 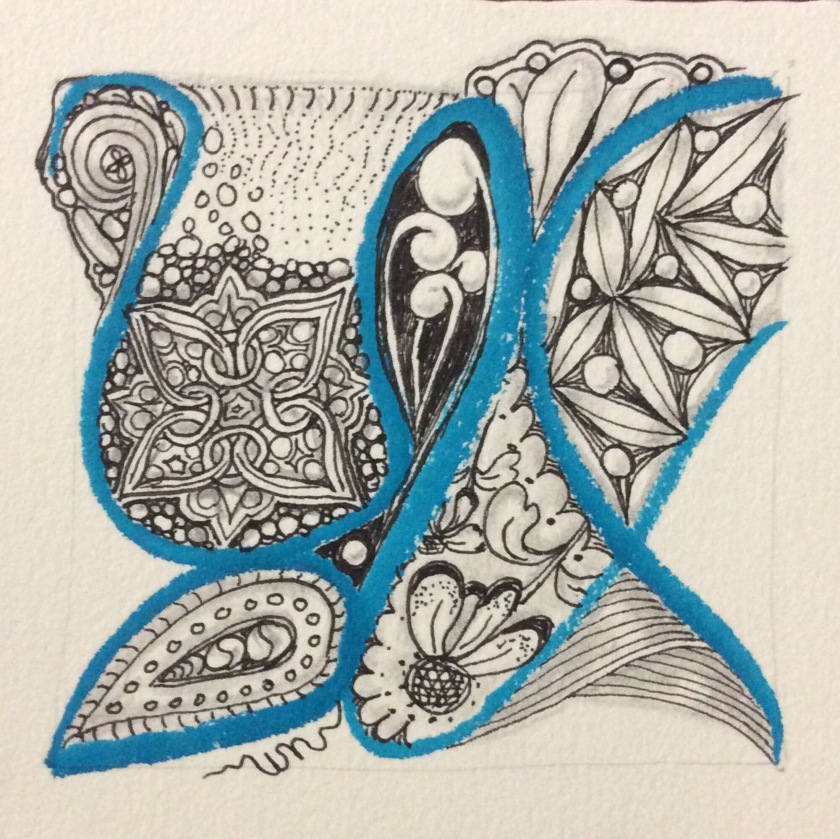 The freehand and freely drawn string created some marvelous spaces that could be filled with tangles. I started with a miniature Way Bop, filling out the space with Tipple and Msst. Next, I added the Mooka, surrounding it with black space as though it were a silhouette. After adding 2 Flee flowers (like cone flowers or thistle) in the lower center (one is tiny and can barely be made out) and embellishing the area with Queens Crown,  I randomly inserted Floo, Flux, a paisley, a favorite triangular Fragment, and those crossing wavey lines at the lower right into the remaining areas. In short, I had a lot of fun working with recently learned patterns as well as older ones in my collection of patterns.

The problem: I really did mean to draw larger. I even promised myself the next pattern after the minuscule Way Bop would be big. Well, you can see where that got me. And the rest of the patterns seemed to refuse to tower over the ones already drawn, once more, I was stuck with patterns draw much smaller than intended.

Yet, all the patterns look (to me) like they belong where they are and in their drawn size. Amazingly, they seem to go together just as they are. As an experiment, this turned out surprisingly well — if you like this sort of thing, that is.

Thankfully, I do like the unexpected. I like the way the turquoise string looks almost like a ribbon tossed on the tile between uses in someone’s hair. The Way Bop could be a rare and exotic tropical starfish-like creature needing a constant stream-like water supply and plenty of pebbles to hid in. The surrounding flowers might thrive on the humidity provided by escaping water vapor.  Other sections serve as decoration for the flowers and fish tank.