Today I started making a conscious effort to draw bigger.

One of the many pieces of advice found in the book Zentangle Primer is to draw patterns large. When certain patterns are drawn large, other patterns can be drawn inside. Patterns that are larger also require more control and focus, and fill up a tile faster. A single pattern drawn very large can serve as the tile’s string.

When I get caught up in tangling, I tend to draw my patterns small. Consequently, my tiles turn out darker than I like. Sometimes, they take on a cluttered appearance. Too often, my tiles take a very long time to draw, sometimes making the mediation almost tedious, detracting from the intended relaxation. Thankfully, tedium rarely happens.

This morning, I tangled larger than usual for most of the piece. It went faster and resulted in an airier-looking tangle. 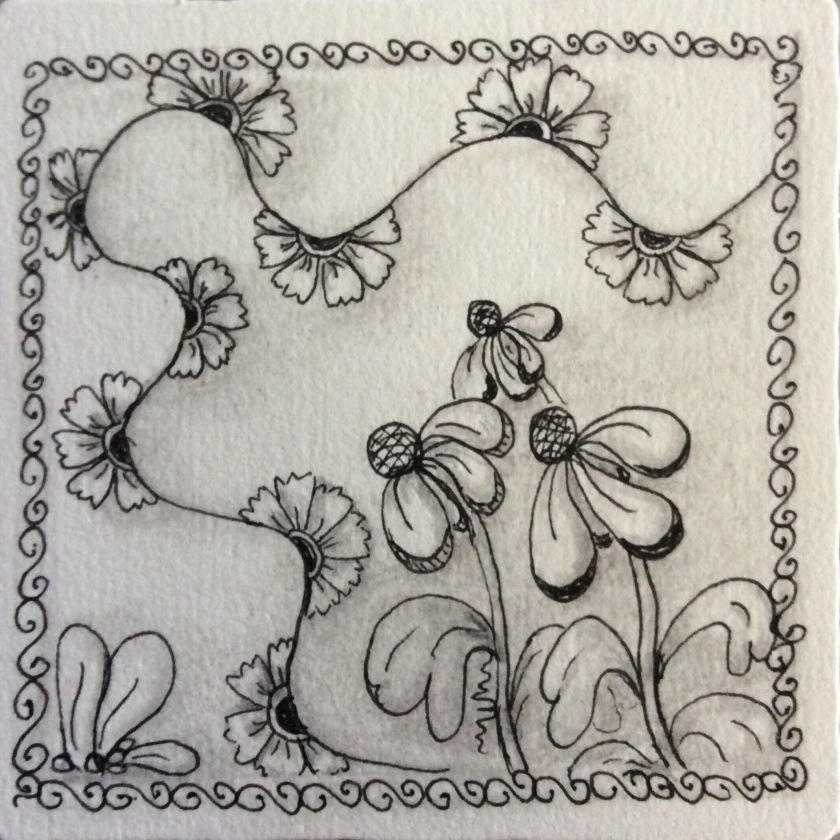 The border was added last and  was drawn along the outside of the original boundaries, without “straightening out,” to give the piece a more spontaneous feel.

Although I need to tangle still larger, this is a step in the right direction. The 8-step Zentangle meditation took far less time than my usual tiles (20 minutes compared with my average hour or so), and, surprisingly, left me feeling more refreshed.

Patterns used in this tile are Henna Drum (the bachelors button looking half-round) and Flee (the cone-flower-like pattern in the bottom right area). Along the outside of the original pencil border, I added a chain of Scoodle elements.

The pattern Flee, drawn even bigger, allows enough space within the pattern to fill leaves and petals with additional tangles.

Here, although I left the petals alone, I filled the leaves with the Printemps pattern to give them texture. The Printemps was drawn with the 2B graphite drawing pencil recommended for shading. The leaves were drawn with the Micron 05 pen, which creates a line about twice as thick as the Micron 01 pen. The texture would be richer drawn with the Micron 01, or somewhere in between if I had used a Micron 005 instead of graphite. The same or different pattern (or several patterns) could have been used to fill in the petals for a totally different effect.
In the last tile, the pattern Flee serves as the string for tangling other patterns in the spaces created by petals and leaves.

Drawing a pattern very big on your tile can give you a lot more options, especially if inspiration is not coming. Each drawing size yields different possibilities. Those possibilities are endless!